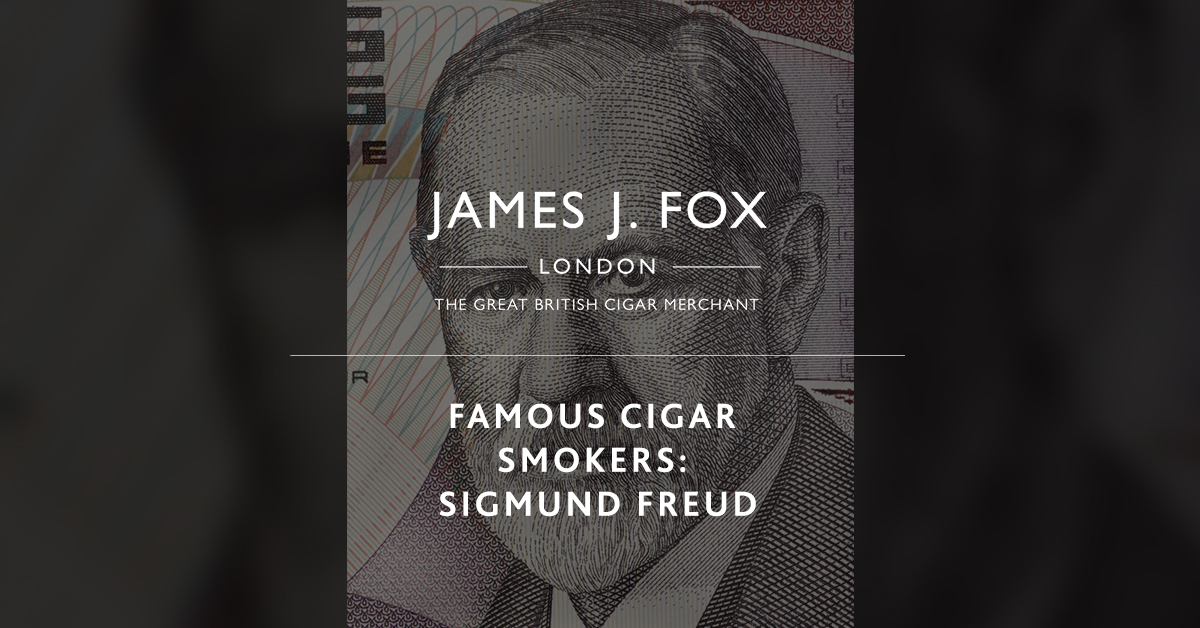 Sigmund Freud (1856 – 1939) was an Austrian neurologist and the founding father of psychoanalysis, a method for treating mental illness that involves creating a dialogue between the patient and a psychoanalyst, as well as a theory that explains human behaviour.

He is perhaps best known for the Oedipus complex, the idea that a child has an unconscious sexual desire for the opposite-sex parent and hatred for the same-sex parent. His work in the analysis of dreams led him to establish the theory of the unconscious mind, where he described the features of the mind’s structure and function, later leading him to the development of the structural model of the mind comprising the entities id, ego and superego.

While his legacy is tremendous and influential, his practices are not so much used in diagnostic and clinical practice today. Freud was a known lover of cigars, seldom photographed without one in his hand, and he believed cigars to be a catalyst for his work.

Freud was born to Jewish parents in the Moravian town of Freiberg in the Austrian Empire; he was the first of eight children. When he was born his parents were struggling financially and living in a rented room in a locksmith’s house. Freud was born with a caul, which his mother saw as a positive sign for her son’s future.

The family eventually made their way to Vienna, where Freud attended school and proved to be an outstanding pupil, graduating with honours. He attended the University of Vienna at seventeen planning to study law but joined the medical faculty where he studied philosophy, physiology and zoology.

In 1877 Freud spent six years in the physiology laboratory comparing the brains of humans and other vertebrates with those of invertebrates such as frogs. This research would later prove seminal for the subsequent discovery of the neuron in the 1890s. His research was interrupted by compulsory military service, and he graduated with an MD in 1881.

Freud began his career at Vienna General Hospital, working in various departments. His time in the psychiatric clinic in a local asylum led to his interest in clinical work, and in 1886 he resigned his hospital post and entered private practice specialising in “nervous disorders”.

In 1885, Freud went on a three-month fellowship to Paris with Jean-Martin Charcot, a renowned neurologist who specialised in the study of hysteria and susceptibility to hypnosis. Once back in Vienna, Freud himself began work using hypnosis in his clinical practice. However, the uneven results led him to abandon hypnosis, concluding that the more consistent and effective method of symptom relief was achievable by encouraging patients to talk freely.

This method became known as “free association”, where Feud found that patients’ dreams could be analysed to reveal the complex structures of their unconscious mind. From here, he explored the influence of the unconscious thought processes on aspects of human behaviour, and he felt that amongst these were the sexual desires in childhood which were repressed.

One of Freud’s most famous works was his theory of psychosexual development, the idea that children move through stages centred on erogenous zones. Freud claimed that successful completion of these stages led to the development of a healthy personality, but fixation at any stage leads to an unhealthy, fixated personality as an adult.

Throughout his career, he published hundreds of essays and books, regularly lectured at universities and was the chief editor of a number of psychoanalytic journals.

Freud’s psychoanalytic system dominated the field from the early twentieth century and formed the basis for many later variants. While the methods have adopted different theories and techniques, the fundamental Freud principle of attempting to achieve psychic and behavioural change through having patients talk through their difficulties have remained.

Despite the extensive critical writings regarding Freud’s work, a number of individuals were influenced by Freud and went on to become some of psychology’s greatest thinkers. These include the likes of Anna Freud, Carl Jung, Erik Erikson and Otto Rank. Freud’s theories have become so steeped in the public awareness that we often forget they had their origins in his psychoanalytic work.

Freud was a prolific cigar smoker, known to smoke around twenty cigars a day. He began smoking aged twenty-four and credits his smokes with his ability to work, quoted as saying: “Cigars have served me for precisely fifty years as protection and a weapon in the combat of life...I owe to the cigar a great intensification of my capacity to work and a facilitation of my self-control."

His cigar options were somewhat limited due to the Austrian government’s strict control over the tobacco industry. It is said he smoked a cigar known as a Trabucco, which was small, mild and considered the best produced in Austria. Freud found them inferior, however, to the Don Pedros and Reina Cubanas, which he obtained during trips away to the Bavarian town of Berchtesgaden. He was also known to receive cigars as gifts from patients and colleagues.

Despite doctor’s advice in the years leading up to his death to give up cigars, Freud refused, insisting that they were a part of his life. He smoked until the very end of his life at age 83, and before he died, he bequeathed his beloved collection of cigars to his brother on his 72nd birthday.

If, like Freud, you enjoy a good smoke, you can come and visit one of our London stores to see what we have in stock or browse our extensive cigar collection online. We have everything from Montecristo cigars to Cuban cigars, contact us today if you would like more information about our range of cigars.