Journey to the heart of Nicaragua: Part 1

Traditionally, the Habanos have been the first choice of cigar smokers and connoisseurs. No doubt that the Cuban Black Tobacco is very tasty and has unique flavour, and that the Caribbean island can show a very old culture of cultivating tobacco as well as crafting cigars.

But in the last few years, another country has emerged in the world tobacco panorama: Nicaragua.

Many magazines specializing in tobacco agree that some of the best premium cigars are made in this small country in Central America.

Although the English market is still very traditional and orientated to Habanos, the presence of New World Cigars -particularly those crafted in Nicaragua- are gaining space in our humidors as well as the preference of many smokers in the UK country.

I arrived in Nicaragua to participate in a tour organised by Tor Imports, the importer and distributor of Nicaraguan cigars in the United Kingdom. Thanks to the efforts of Tor and their partners in Nicaragua, for five consecutive years a group of retailers have been afforded the opportunity to participate with the aim to improve their knowledge on Nicaraguan tobacco and experience first-hand the high skills developed by this relatively young industry in the Central American nation.

This was my first trip to Nicaragua. The few references I’ve had of this country were through my uncle who had been there in the 1990’s - not precisely the best time for Nicaragua - as well as the idealised and highly politicised image shown by the Cuban media to which I was exposed to when I lived in Havana. And more recently, I’ve had the opportunity to taste Nicaraguan tobacco and rum at James J Fox, where I’ve been working for two years now. 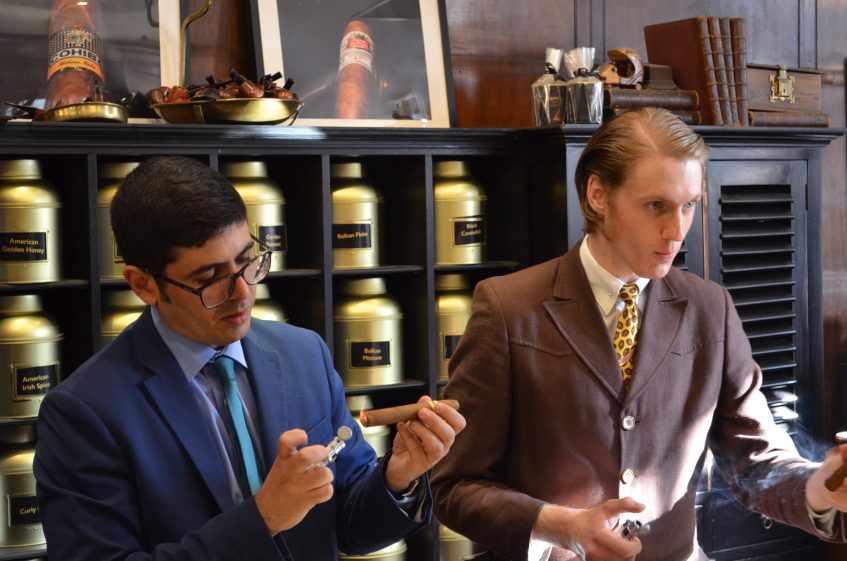 The tobacco in the veins of Nicaragua

Talking about the tobacco industry in Nicaragua fundamentally involves talking about the most recent history of this country, the most important events that have impacted this nation in the last fifty years shaping its cultural identity.

We felt it from the first minute of our tour when we were picked at the airport in Managua by our hosts Henry and Edward from Drew Estate, and taken to a restaurant in the city for a welcome lunch, as well as our visit to the Joya de Nicaragua factory. 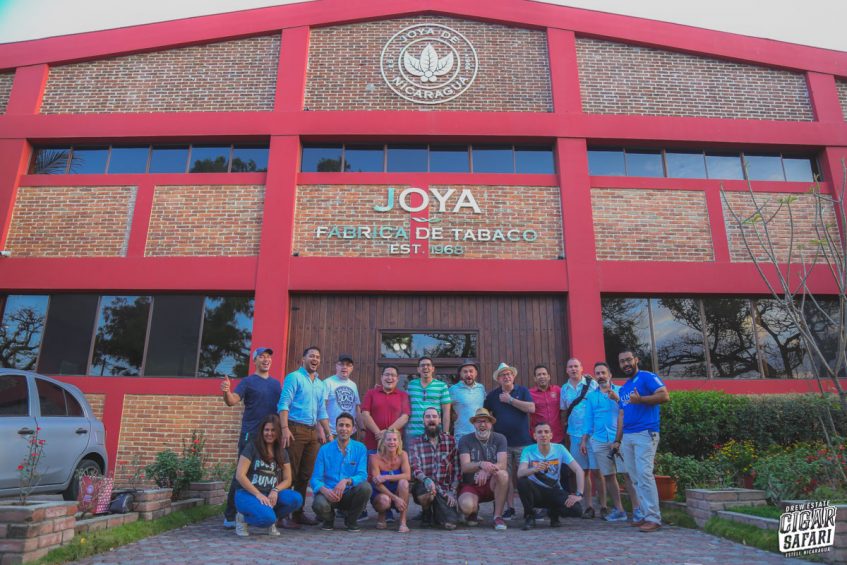 The group at the Joya de Nicaragua factory. (Photo by Lebin Gonzalez)[/caption]

During our stay in Joya, Ariel López and Mario Perez immersed us in a journey through the history of the factory and the nation, the sufferings and frustration of the people during the dictatorship of Somoza, the bloody civil war, and the later reconstruction of the country’s economy.

Joya de Nicaragua was the first premium cigar factory established in the Central American nation. Before Joya, there were only tobacco crops in Estelí, but nobody had had the idea to build and promote the industry as such we know today.

Nicaraguan Cigar Industry inside Joya's Factory (Photo by Lebin Gonzalez)The first impulse was initiated by two Cubans: Francisco Bermejo and Simón Camacho. Many Cubans had gone into exile in the United States and other countries, after Fidel Castro expropriated lands and companies belonging to foreign and Cuban citizens.

Bermejo and Camacho found a very generous and fertile land and a climate like Cuba. They decided then to establish the first factory and train local people in the art of rolling premium cigars.

This is how Nicaragua Cigar Company and its brand Joya de Nicaragua were founded in 1968. Joya was the first brand of Nicaraguan premium cigars. The name of the brand finds its reference from the farm, “La Joya”, where since then has been cultivating the tobacco used to roll these cigars. 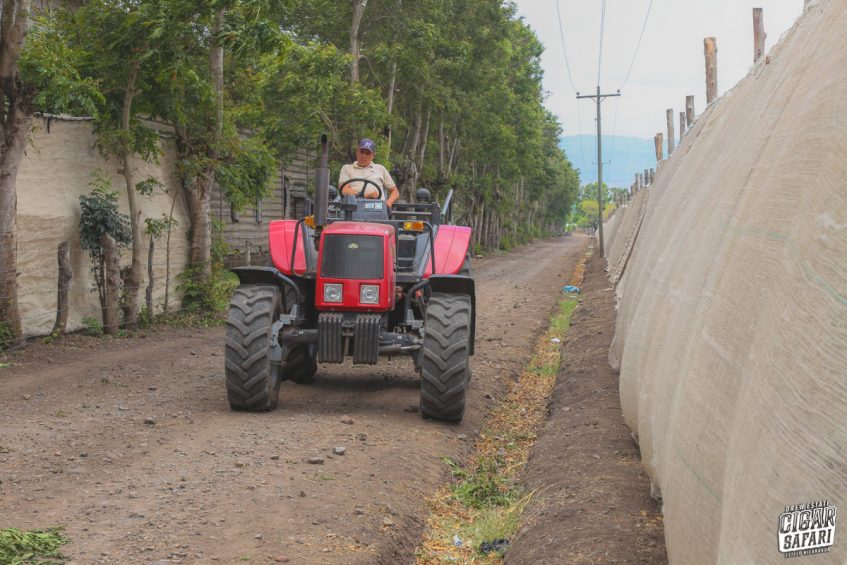 “La Joya” was the first farm we visited during our tour in Estelí. The first crop of leaves located near the base of the tobacco stalk, close to the ground, had been already primed.

Priming is the removal of mature leaves. The plants can have up to eight ‘primings’. The number of primings depends on the type of tobacco plants. Each leaf is picked up by hand.

We also walked into the barns where the leaves harvested were being air-cured. The leaves are cured when the characteristic fresh and bright green colour is turned to dried brown or golden. To achieve this, the farmers string the leaves to narrow strips of wood called laths, which are hung from the ceiling. The process lasts 45 to 60 days. 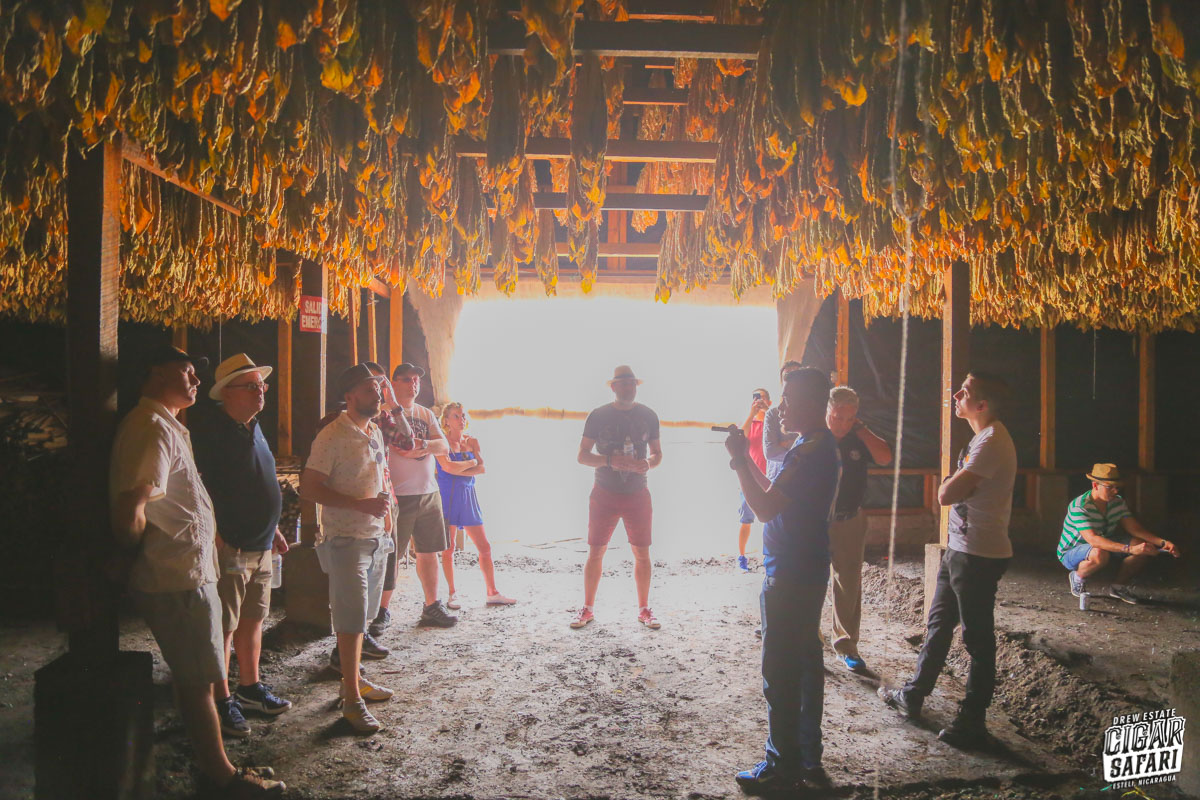 The key to this process is constant vigilance and adjustment of ventilation and light to guarantee a successful development of the leaf.

In one of the barns we visited the leaves were being flue-cured. A couple of farmers were carefully monitoring the temperature to avoid this process completing too quickly, ultimately maturing before appropriately required.

The curing is the first step of a long process the tobacco leaves must go through before they’re ready to be rolled in the factories. 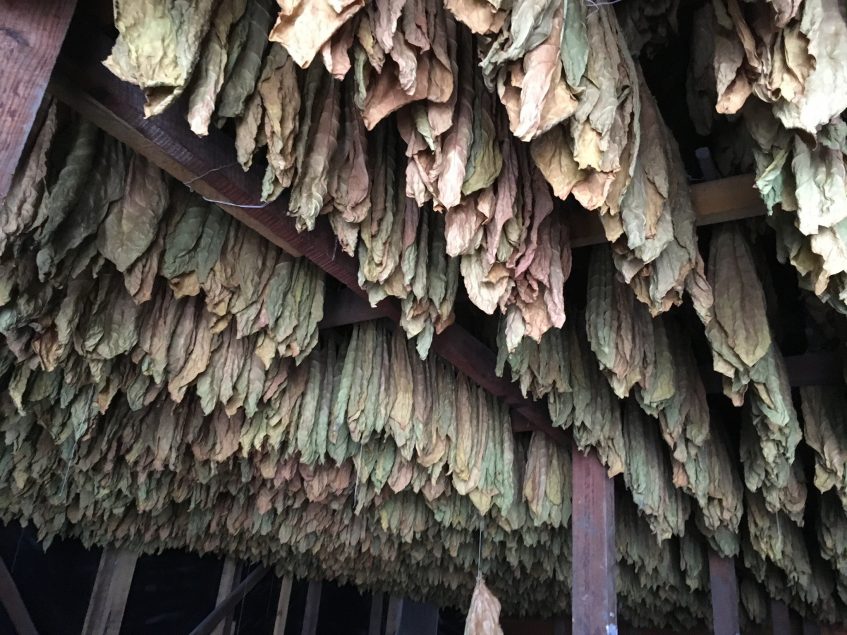 After this tour in “La Joya” we visited the factory where these leaves, amongst tobacco leaves harvested in other countries, are fermented (process that transforms the flavours and aromas of the leaf) and used to craft the cigars. We witnessed the very skilled work of the rollers.

Nicaraguans use a different method to Cubans. They work in pairs: a man makes the bunch and his companion, always a woman, dresses the bunch with the wrapper.

This technique is called Entubado. The rollers select the fillers and fold them inward, placing them one on top of the other one, evenly, until the bunch is complete.

This technique is considered to be very sophisticated, creating a supreme air flow through the cigar and a sharp burn. This is what explains the perfect draw we always find in Nicaraguan cigars and the amounts of clouds of smoke.

Then the bunch is placed on the binder leaf and rolled with the binder around the filler. The cigar is not still finished; the roller then places it in a wooden mould that will pristinely shape them. Then comes the most difficult step: dressing the cigar.

In Joya and the other factories, we visited (Drew Estate and Tabacalera AJ Fernandez) the ladies were always responsible for dressing the cigar. According to tradition, it’s believed that women’s hands are more delicate, so they dress the cigars with more gentle and soft handling.

Our guide, Ariel Lopez, explained to us the whole process while roller Ruddy Ruiz did the demonstration of how to roll a cigar. Then we were ready (so we thought) to craft our first cigar. We managed to put together a decent bunch with the assistance of Ariel and Ruddy.

This was the moment when you once again appreciate the high skilled work the rollers do every day. Rollers undergo at least 12 months of training and practice before becoming professional torcedores. Only after passing the final difficult expert test, they can be truly called masters in the art of crafting cigars.

This educational and enjoyable experience wasn’t all Joya had in store for us. We were taken to an open area behind the walls of the factory for a surprise of a blending session.

With a glass of rum by Flor de Cana – an excellent companion for this task - we had the amazing opportunity to create our own blend. Lots of different tobacco leaves to choose from. I went for a medium to full bodied blend in a robusto format. The wrapper and binder were Nicaraguan Habano Criollo and the filler was composed by three different leaves: ligero and seco grown in Esteli and viso from Jalapa.

Seco is the name for the filler leaves primed from the lower portion of the tobacco plant. They are mild to medium in flavour for the plant from which they were harvested, with a very good ability of combustion.

Viso are filler leaves primed from the middle of the plant between the seco and ligero leaves. They are stronger in flavour and can be potent depending the variety of the leaf.

The filler leaves primed from the top of the plant are called ligero. They are the most robust in flavour and tend to burn slower than other leaves.

To the workers and managers of this factory, Joya represents much more than a brand. Every day they have the challenge of producing a cigar that epitomises the most authentic Nicaraguan tobacco and its flavour, being aware that what is sold today worldwide is more than a cigar: it is tradition, culture; it’s the identity of Nicaragua.

Today, the 300 workers of the factory produce around 20,000 cigars a day, distributed in some 52 countries according to official data. Half of that production goes to the United States, where Joya is one of the favourite cigars. The other 50 percent is distributed in the rest of the 51 countries of the world, where Joya has conquered its presence.

But reaching this port has not been easy. In its 50-year history, Joya suffered the devastating effects of civil war, natural catastrophes, and a US embargo.

In 1971, Anastasio Somoza visited the White House, his only official visit to the United States. To his surprise, President Richard Nixon offered him a puro Joya, which aroused the ambitious interest of the Nicaraguan dictator in the sector.

The brand had dazzled the White House, which by then had not been able to enjoy more of the Cuban cigars since 1962 when US President John F. Kennedy signed the embargo against Cuba, preventing the importation of all Cuban products in the United States. In this context, Joya had arrived at the White House and become the favourite brand.

Upon realising the takeoff of this Nicaraguan cigar in the United States, Somoza, through apparent pressures and blackmailing, managed to become one of the partners of the Nicaragua Cigar company in 1972. Four years later he became one of the absolute owners of the company along with his partner Daniel Rodriguez.

Before the Sandinista government nationalized the company, Daniel Rodriguez managed to transfer the Joya de Nicaragua brand to his name and started selling cigars under that name in the United States, once the White House imposed an embargo on Nicaragua.

Thus, this Joya was produced in Honduras and sold in the United States, taking advantage of the vacuum created by the absence of the authentic Joya de Nicaragua, as the importation and distribution of the genuine Nicaraguan puro had been prohibited in the US.

In 1994, the company was acquired by Alejandro Martínez-Cuenca, who after four years of negotiations managed to recover the registration of Joya de Nicaragua. With this step, Martinez-Cuenca began a process of relaunching and rescuing the factory and the brand of cigars so well known worldwide today.

Today, Joya de Nicaragua groups several sub-brands for different type of consumers. After 50 years with many cigar companies around in Esteli and a very tough competition, Joya is still leading the Nicaraguan cigar industry, showing the pride of being the first premium cigar factory in the country.

[caption id="attachment_1053" align="aligncenter" width="847"] Click the image for the photos from the historic night.[/caption]

Everything started in Joya, in 1968, and after so many storms, everything is still happening in Joya...