After the cancelation of the XXIII Habanos Festival left a major void in the diary of many cigar smokers, Habanos S.A created a new alternative solution, Habanos World Days.

The Habanos Festival is a week-long celebration in Cuba showcasing all things Habanos, including auctions, presentations of new releases and conferences. That would be it in a nutshell to somebody that is not very interested in Cuban cigars. Our outlook and for like-minded cigar aficionados is this a week where the cigar smoking community, people fond of Habanos and Havana culture, come together to support the best of and upcoming of Habanos. It is a celebration that is revered as much as a new year or religious celebration and that is because the Habanos festival, symbolically, is very much like that.

For many that attended the festival in late February 2020 it was the last meaningful trip since the pandemic became a worldwide crisis. From Havana night festivities to an unprecedented British springtime where the only people regularly outside were the extraordinary key workers. And to them we thank for the continual efforts they have put in over the last 15 months as well as our staff who put in a colossal effort in fulfilling all our website orders during each lockdown.

Heading into this year, generally, there was no real indication for optimism as the 2021 Habanos Festival had to be cancelled. This week is often an automatic addition to the calendar for some, so its cancellation was a huge disappointment. It would have been the 23rd edition of the annual event in Cuba, each one arguably more grandiose than the previous. However, we have seen during these times of restrictions that people have learnt to adapt and display ingenuity for getting things done.

Habanos S.A. have done exactly that to bring us Habanos World Days, a virtual event to fill the void left by the festival. World Days took place from 4th May – 6th May, with several presentations being scheduled into specific times across the three days. Nothing can replace the originality and flamboyance of being in Cuba for the live festival, but World Days is a great practical solution to satisfy everyone’s Cuban cigar lust.

World Days covers a variety of themes including cigar and drinks pairings, Cohiba: ‘The Success Story’, the virtual fair and the eagerly anticipated announcements of the new releases.

Cohiba is the main protagonist of this year’s event as the they celebrate the brand’s 55th anniversary. Not a standout milestone, but there is a large focus on this celebration. With Cohiba being the marquee brand and Habanos S.A working towards scale and scope with new brand aesthetics, packaging and collaborations, Cohiba 55 has been created to be one of the most important in Habanos S.A history.

Most of us are aware of the Cohiba x S.T Dupont collaborations to have launched in the last year – the traditional Cohiba collection back in September and the Behike Cohiba collection in early 2021. Before 2020 the first and only collaboration between the brands was back in 2003 and now we are expecting the third in a twelve month period, Cohiba 55. Products will include cigar cases, humidors, cigar cutter and lighters.

The collaboration with luxury Swiss watchmaker Zenith has been in place since 2016. Habanos S.A and Zenith have taken the expertise they have in their industries to create limited edition time pieces celebrating some of the most famous cigar brands of Havana. The Chronomaster Open Cohiba watch is limited to just 55 pieces to commemorate the Cohiba anniversary. The watch and cigar accessories further the obvious notion of Habanos Cigars as a luxury lifestyle commodity, particularly Cohiba. 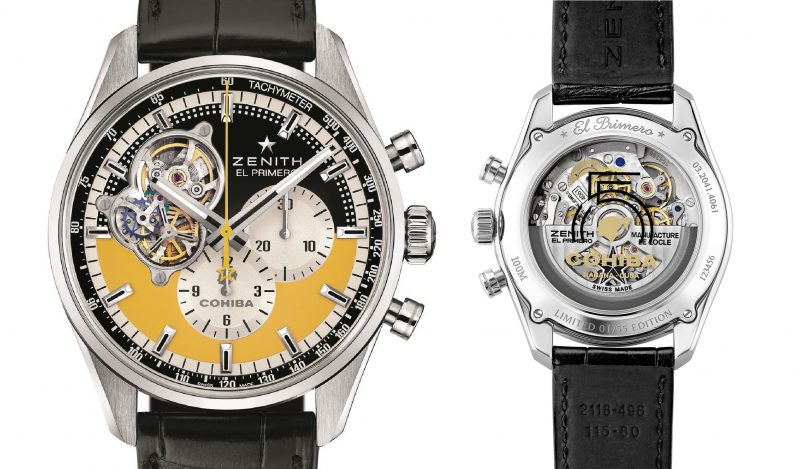 There are cigars to mark the anniversary too...

Three new Cohiba cigars are to be released following the announcement at the Habanos World Days:

Cohiba 55 Aniversario. This is one of the three Edicion Limitada cigars for 2021, and the first since the Cohiba Talisman in 2017 – if that was not reason enough to be excited. It is the same length as the Siglo VI at 5 7/8’’ / 150mm, while the ring gauge is one of the largest we have seen from Habanos, 57. Although not as wide as the brand’s 50th Anniversary cigars Cohiba 50 and Majestuoso 1966 with 60 and 58 respectively, or the 2014 EL Cohiba Supremos with 58 RG, the 57 ring gauge will provide a blockbuster type of smoking experience. The cigars are presented in Boîte Nature boxes of 10 cigars. It has the traditional Edicion Limitada band as well as a Cohiba 55 commemorative band at the foot.

Cohiba Ambar. This cigar will be a new classic line added to the regular production from Cohiba. It is a unique vitola with the factory name of Placeres, a length of 5 1/4’’/ 132mm and a ring gauge of 53. If the ring gauge is anything to go by from recent releases of the Montecristo Maltes and Trinidad Esmerelda then this should be a fantastic cigar. The cigars are presented in Boîte Nature boxes of 10 cigars. No extra bands but, interestingly, it has a pigtail cap.

Cohiba Ideales. This Coleccion Habanos is the 2021 edition for the series. It follows up the H.Upmann Super Magnum Collecion Habanos for 2020, which to our knowledge hasn’t been released just yet, but we speculate that the Cohiba Ideales will arrive first. The dimensions of this cigar make it the all-round biggest of the three new Cohiba releases, with a 6 7/8’’ / 175mm and 56 RG. The factory name is Modernas, and is another first of its size. The cigar will have two additional bands to the Cohiba band – Coleccion Habanos band, a requisite for all cigars for this edition, and a special Cohiba 55th Anniversary band. In typical Coleccion Habanos style it is presented in a special luxury ‘book’ box of 20 cigars with each box individually numbered to identify one of the 3000 produced. It is the ‘Volumen XVIII - Serie B’ for those keeping track. This will only be available at La Casa del Habano James J Fox in Harrods because it is a LCDH exclusive.

There is still a lot to cover from the Habanos World Days virtual event. We will cover the special releases and other features from the event that will be of great interest in the next part of our blog post that will be published during the week.