Christmas Day is the one day of the year that I allow myself to enjoy an after dinner cigar at the dining room table with my family. This rarity means that I spend most of December trying to figure out which cigar to enjoy. There are 6 days to go, and I am starting to stress under the pressure to get it exactly right. For me, taste is hugely affected by context, so I am not going to mess up the best context of the year with a poorly chosen cigar. So which cigar?

I have always been a big fan of the Partagas brand, but for me, the brand is less important than the actual physical quality of the specific cigar in question. I need to see it, to smell it and to touch it to assess whether it might be the right one. I then need to sample one, or take up a reference, to satisfy myself that the blend will be right for the occasion.

My quest isn’t helped by the production inconsistencies affecting the Cuban cigar industry; one of the first cigars I can remember being brilliant was a Bolivar Belicosos Finos. I have had many since; some brilliant some not so much. I had another last night. It looked good, it felt good, it burned evenly, but its blend was desperately disappointing. Partly because I always have such high expectations for this particular vitola, but mainly because it just wasn’t good enough.

So where do I start?

Can I remember any particularly brilliant cigars smoked during the last 12 months? Yes, several. A La Flor de Cano Gran Cano GB RE 2013 was stunning. The newly introduced Trinidad Topez EL 2016 is very good but a little fresh. A recent Cohiba Siglo VI was as good as it gets for an off the shelf cigar. I have options.

Decide on size. Something that will last an hour. Something with a relatively full ring gauge.  Trends are widening ring gauges so I have more options.

Decide on the flavour profile. I will be smoking after dinner; it needs to be strong enough to make a tired palate take notice. It will be accompanied by a big Bordeaux followed by an aged rum; it needs to be bold enough to compliment these flavours. This is going to be a lazy smoke, I don’t want the hassle of trying to identify nuances and subtleties so I think I can rule out an older vintage cigar.

Reaffirm my position on construction. It needs to be well filled. No soft spots. Not spongy. I want a bit of resistance on the draw. Perfect construction is a non-negotiable pre-requisite.

Go to the walk-in humidor and take some inspiration and advice.

Some of the new Juan Lopez Selection Superba GB RE 2016 feel good and look good, but I had one last week, and while I really enjoyed it and am quite excited about how good this particular cigar will be, some bitterness of youth remains in the final third and I couldn’t take that sort of disappointment on the 25th. So I need something with at least 6-12 months age. The big spike in global interest in all things Cuban combined with successive poor harvests in Pinar del Rio doesn’t help me here; most of the cigars we are receiving have been very recently produced. Inventories in the supply chain are very low.

What about my trusted Partagas? An E2? Philip advises they are smoking a little hot at the moment, but suggests the P2 which has been brilliant since its introduction and is rapidly achieving classic status. However, his top recommendation from the Partagas range is the Selection Privada EL 2014.

Halils considers my requirements and recommends the Ramon Allones Club Allones EL 2015 as one of the best “off the shelf” cigars available in the humidor at the moment. It certainly has the strong flavour profile I am looking for, but I am concerned that it won’t be big enough for the occasion.

Nic points me to a large selection of Churchils across multiple brands. I love Churchills. The current stock of the RyJ Churchill look great, but not nearly as good as the flawless glistening 1997 stock. There are a few dark 1997 San Luis Rey Churchills still available too which would be a closer match to the full flavour profile I am after. But the pick of all the Churchills on shelf is a Hoyo de Monterrey Churchill dressed box from 1999 which have stunning Maduro wrappers with a little sheen. Cigar Aficionado awarded this cigars 1997 equivalent with 100 points. I wonder if two years makes much of a difference.

Going back to the GB RE theme driven by my memories of the Gran Cano, I see some Por Larranaga Sobresalientes GB RE 2014 still on the shelf; there is a cigar which really impressed me. It’s the right size. Its construction is flawless.

Settle on a short list. I buy singles of:

Spend time in the sampling room over the next two days. Sample and take notes.

The Por Larranaga Sobresalientes matches the brilliant cigar I remember. The Por Larranaga brand wouldn’t have a reputation for being full flavour, but to be honest, there really isn’t such thing as a Cuban cigar with a mild flavours; the differentiation between full and mild is very much a relative thing. This sobresalientes offers me rich flavours of hay and background spice with a creamy sweetness all the way through. This could be perfect.

The Partagas Seleccion Privada starts a little dry, but after the first inch it gets noticeably sweeter, and it has strong bold flavours of full roast coffee which would really suit the occasion. The cigar delivers consistent power right to its end. Another strong contender.

The La Flor de Cano Gran Cano doesn’t go well. My first attempt fails before I start as the cigar is plugged, but it is quickly replaced. My confidence in this cigar is further shaken as the initial flavours are not particularly pleasant. The sweet damp grass flavours I expected didn’t present until the 2nd third and were then short lived.

The Hoyo Churchill from 1999 is quite a remarkable cigar. It has achieved a distinct box press during its 17 year wait. Construction is flawless, draw is perfect. Leather, milk chocolate and cedar flavours have mellowed and knitted over the years to present a rich opulence from the very first draw. Its mouth-watering. This is the surprise of the sampling session.

The Ramon Allones Club Allones offers me great earthy flavours on a cedar background. It’s profile is just about perfect for the occasion, and the Maduro wrapper offers a nice sweet element to proceedings, however, my concerns about its size persist. This cigar gives about 45 minutes of bliss, but I’m looking for over an hour.

For me it comes down to a choice between the Por Larranaga Sobresalientes Great British Regional Edition from 2014 and the Hoyo de Monterrey Churchill from 1999. They’re quite different, but equally good. Neither would be categorized as full flavoured, but the Por Larranaga is a little more powerful than the Hoyo and it is more direct and upfront. The Hoyo offers subtle and complex flavours with great length. On the 25th I won’t have to focus to fully savour them. On another occasion this would be my preference, but this year my Christmas Dinner cigar will be the Por Larranaga.

I buy some Por Larranaga Sobresalientes. I also buy some Hoyo de Monterrey Churchill from 1999. After all, there are 12 days of Christmas. 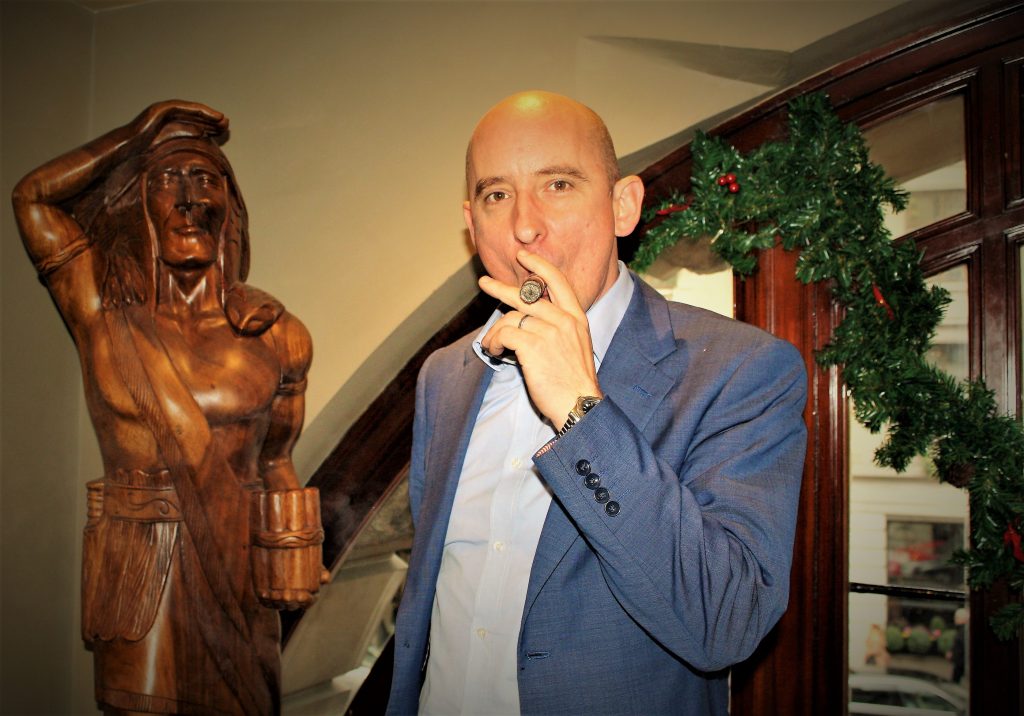