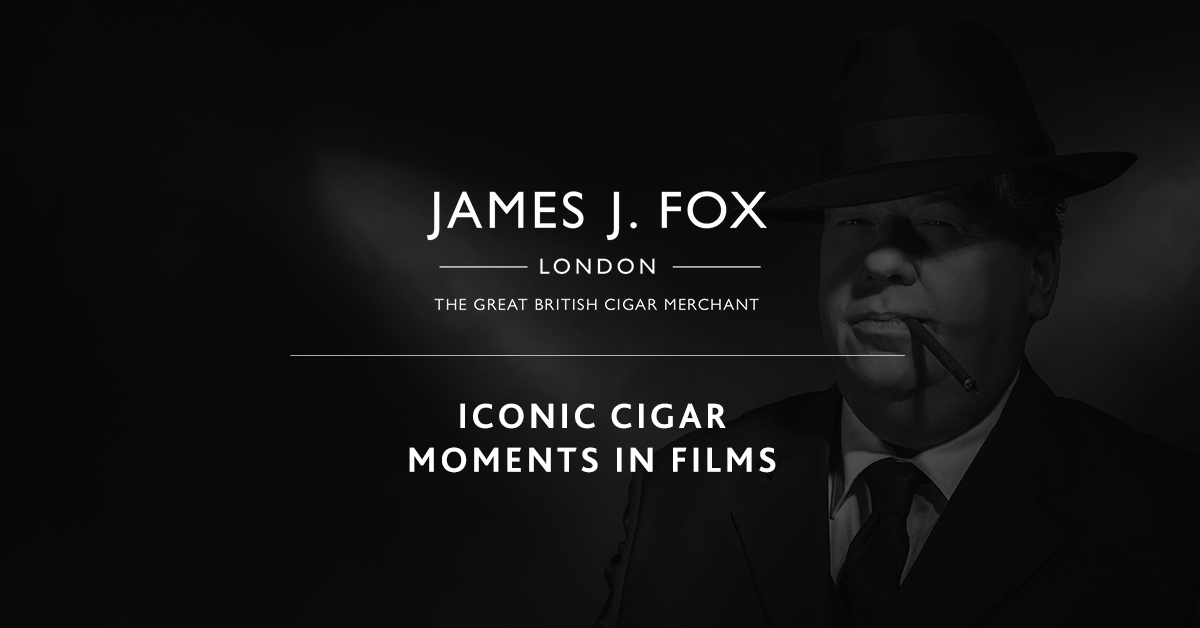 Some stars of the big screen have become synonymous with cigars, like Groucho Marx, whose cigar habit was an integral part of his persona. Or Arnold Schwarzenegger, whose film career has seen him play many characters who can be seen with a cigar clamped between their teeth, and he has even donned the cover of Cigar Aficionado. However, the impact of the cigar on the big screen does not always belong to the actor performing, but the moment within the film itself.

Cigars have played a pivotal role in the film world, creating some truly iconic moments that we just can’t forget. Here is just a sample of some of the films that feature wonderful cigar moments.

Actor Pierce Brosnan’s final addition to the James Bond line up, Die Another Day features a scene where Bond visits a Cuban cigar factory and discovers a sleeper agent who has been stationed there. In the scene, Bond claims he is there to pick up some “Delectados”, which was not an actual cigar during the making of the film but was, in fact, the code word that awakens the sleeper agent. However, following the film’s release, cigar companies began to produce Delectado cigars in honour of the iconic, British character.

Sci-fi action film Independence Day, starring Will Smith as Steven Hiller and Jeff Goldblum as David Levinson, features two truly iconic cigar moments. Towards the end of the film, with both of them inside the alien mother ship on a mission to save the world, Hiller hands Levinson a cigar, telling him: “This is our victory dance. Not until the fat lady sings. This is important.” And in another scene, after Hiller falls from the sky, runs over to a crashed ship, punches an alien in the face with a curt: “Welcome to earth”, he slickly places a cigar between his lips. If there was ever a time a man desperately needed a cigar, it was that moment.

Hugh Jackman’s iconic performance as the Wolverine has turned this comic book character into one of the biggest and most popular franchises of all time. Known for his claws, sideburns and love of cigars, there’s no shortage of cigar moments from this character throughout the entire X-Men series. In this film, Wolverine puts a cigar in his mouth right before slashing a gas tank and blowing up the bad guys with a fireball. As the flames subside and Wolverine steps out, it appears that the explosion has lit the cigar for him.

Predator is a classic Arnold Schwarzenegger film, so of course, we can expect to see a cigar moment here. The film follows a team led by Schwarzenegger’s character as they are sent to Guatemala to rescue a group of hostages, but they end up discovering a creature with superhuman strength and the ability to disappear into its surroundings. At the beginning of the film, Schwarzenegger can be seen casually enjoying a cigar before he departs from the military helicopter and into the action.

This Ridley Scott film features a line that will be very familiar to cigar aficionados. Mr Atto smokes a cigar in his office and a US troop comes in for a meeting, he offers him a cigar to which the troop refuses, stating that he already has one. Mr Atto responds with: “They’re Cuban”, only for the troop to claim that so is his, which Mr Atto rebuts with: “Miami, my friend, is not Cuba”.

Al Pacino as drug kingpin Tony Montana is an incredibly memorable film portrayal; who could forget him telling his enemies to “Say hello to my little friend” before blasting open the door? In the restaurant scene, having reached his peak, Montana rants about the issues of life while puffing away on a cigar.

Clint Eastwood is renowned for his cigar smoking in the Dollars trilogy, and the third and final film is especially true of this. In this film, we see quite a sad yet powerful moment, where the Man with No Name shares a cigar with a dying soldier after covering him with his coat. A true sign of respect to a man taking his final breaths.

Quentin Tarantino’s tribute to spaghetti westerns features a freed slave on a mission to save his wife from a plantation owner. Expertly portrayed by Leonardo DiCaprio, the antagonist Calvin Candie smokes cigars throughout the film using a cigar holder. At the end of the film when Django has rescued his wife and has returned to Candie’s plantation to finish off his family and his loyal house slave, played by Samuel L. Jackson, Django is wearing Candie’s clothes and is also sporting his signature cigar holder between his lips he watches the house go up in flames.

[embed]https://www.youtube.com/watch?v=JLjTmuZxK8Y[/embed]
Cigars indeed have brought some iconic film scenes to life. If you would like to purchase cigars, we supply a wide range including Cuban cigars, Dominican cigars and Romeo Y Julieta cigars. You can browse online or come and visit us in one of our cigar shops in London.
Categories: Culture
Posted By: JJ FOX
Search
Recent Posts
Archives
Categories
Compare Products
Compare
Clear All
You have no items to compare.
My Wish List
Last Added Items
Go to Wish List
You have no items in your wish list.